Go Back in Time at Pueblo Antiguo

Straight from the Source: An Former ILISA Student Speaks

Step Back in Time at Pueblo Antiguo 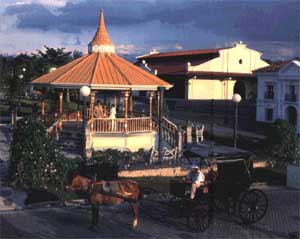 Have you ever wondered what life in Costa Rica was like 100 years ago? Pueblo Antiguo, located in Costa Rica’s Parque de Diversiones will let you step back into the past.

In Pueblo Antiguo’s City, the nation’s capital at the turn of the century has been recreated. This section includes some of the predominant buildings around which urban life revolved: the church and plaza, the Congress, the market, shops, the fire station and the bank. These buildings are not necessarily faithful reproductions of the originals, but do maintain a style particular to the era.

Most of the buildings in the Countryside section are over 100 years old. They have been purchased from diverse areas of the country and have been transported to Pueblo Antiguo where they currently stand; others 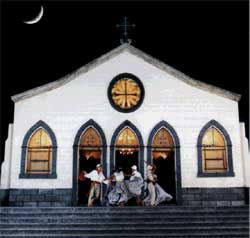 have been constructed in the period’s styles. Buildings are filled with furnishings and appliances from the era. In this section, you’ll find a dairy farm, a country grocery store, coffee and sugar mills, a traditional style restaurant, a train station and several rural houses. An indigenous people’s settlement is a recent addition.

The Coastal section features replicas of a seaside restaurant from the Caribbean Coast and a miniature of the Tortuguero Canals.

In addition to the period architecture, Pueblo Antiguo’s professional theater troupe will transport you back in time. Their original works are based on the inspired words of great political leaders and the insightful comments of everyday people and recreate the spirit of independence, patriotism, democracy and religion that have shaped the country. Come to learn about the roots of Costa Rican customs, traditions, myths, legends and amusing idiosyncracies in hour-long theater, music and dance presentations. Performances are normally held in the open air in Pueblo Antiguo’s main square. Some are bilingual (English-Spanish) and many invite the audience, especially kids (and kids at heart), to participate.

Best of all, by visiting Pueblo Antiguo and the Parque de Diversiones, you’ll be supporting a good cause. All proceeds from the park are used to support Costa Rica’s National Children’s Hospital.

Straight from the Source: An ILISA Student Speaks

Swiss business economist Urs Haeflin joined ILISA for a one month course. He was so impressed with the program that he soon extended two additional months. We invited Urs to tell students about his experiences with us. This is what he wrote: 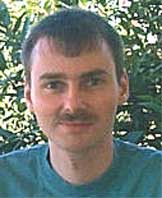 At the beginning of the year 2000 I studied Spanish for 3 months at ILISA. It was time enough to be able to assess the school and its services.

The school lies south of the Church of San Pedro in a quiet zone of San José. The building is modern and has been designed especially for its purpose. All the rooms are well equipped and comfortable. The terrace, which also contains a restaurant for students, offers a marvelous view over a part of San José. The wonderful garden also contributes to the relaxing atmosphere.

However, the most important part is the staff. All the teachers are well educated, friendly and motivating. Together with the class size of maximum 4 students, I found the ideal circumstances for learning Spanish. All the people are really helpful and are trying to support the students in every possible way, from travel planning and reservations for excursions to host families and more.

About the host families: My experience was just great! I felt right at home. It is the best way to practice the language and learn about the Costa Rican culture at the same time.

Apart from learning Spanish, Costa Rica offers a lot of different places worth visiting. Anyone who is interested in nature will be impressed. Because of its central position, San José is the ideal starting point for exploring the countryside. Moreover San José is the center of Costa Rica’s cultural life. Apart from theaters, museums and cinemas, there are opportunities to learn local dances like Salsa or Bolero.

All in all, I only can recommend ILISA to anyone who is interested in learning Spanish as a foreign language. On my behalf, I will return to ILISA as soon as possible.

Holy Week in Costa Rica would not be complete without eating miel de chiverre. This traditional treat’s closest US and European relative is mincemeat. It’s made from a watermelon-sized chiverre squash and seasoned with brown sugar, cinnamon and cloves.

Here’s how to make a traditional dulce de chiverre.

1. Bake the whole chiverre in the oven or cook it over a wood fire. The baking process separates the hard outer shell from the chiverre’s soft insides.

2. When the chiverre is fully-cooked, break it open. (You will probably need either a sharp knife or a saw to break it open.) Pull out the soft flesh. Discard the outer-shell.

3. Using a big fork (i.e. the type you use for barbequeing), shred the flesh of the chiverre. It will separate into long fibers.

4. Wrap the shredded chiverre in a cheesecloth. Squeeze to remove liquid as much liquid as possible from the flesh.

5. When the chiverre flesh is dry, measure it. For every one cup of plup, you will need to 1/4 cup of brown sugar syrup. To make brown sugar syrup, mix dark brown sugar with water. Heat and stir. Adjust proportions until you have a mixture that is the consistency of heated maple syrup.

6. Put shredded chiverre and syrup in a large pot. Season it to taste with cloves, fig leaves, cinnamon and pumpkin seeds.

7. Cook over very low heat, stirring frequently until the chiverre is soft.

8. Serve warm on its own, or use it to stuff empanadas or to make bread. Chiverre keeps very well. Store it in an airtight container in the refrigerator.

If you want to try the recipe but your local supermarket doesn’t keep chiverre, you might try using spaghetti squash. You can omit the baking step and make the recipe using thinly sliced green (unripe) papaya and thinly sliced mangos instead of chiverre. The latter is the traditional way of making the dish in Nicaragua.

Xina Sanahuja, ILISA’s Program Director, states, “We are all so pleased that JoAnn has been offered such a great opportunity. She is an extremely dependable co-worker and we will with no doubt miss her a lot. We all wish her, her husband and son David a wonderful experience.” 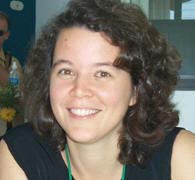 JoAnn has worked with ILISA for nearly 5 years, first as our Homestay, Information and Student Welfare Coordinator and subsequently as the Director of Operations. Says JoAnn, “It’s been really exciting to have been a part of a organization with such a strong commitment to service quality. Over the last 5 years, I’ve seen a lot of growth and changes; we have new facilities, more specialized program offerings and even better administrative processes. Our dynamic long-time teachers are still with us and, at the same time, we’ve been able to attract some highly talented teachers from other programs. The forward momentum is just incredible.”

“For me, one of the biggest benefits of working with a medium-sized organization is the fact that I’ve been involved in organizational development and decision-making across the board. Before joining ILISA, I never would have even considered earning an MBA. Now there’s really nothing I’d rather do. I’m looking forward to sharing with my classmates my rather unique perspective of working internationally with a medium-sized business and to learning formal methods of management and decision-making.”

After seven years in Central America, five in Costa Rica and two in Nicaragua, JoAnn is ready to return to the US, at least for awhile. She will move to Atlanta with her husband, Manuel, and one-year old son, David. She adds, “It will be hard to leave ILISA, though I know that I’m leaving the organization in good hands. Our staff has never been better!”

Thorwald Westmaas, ILISA’s Director says, “JoAnn has been instrumental in helping ILISA grow. She has left her mark on the organization and will be greatly missed.”