I’m Julio Salas, ILISA’s founder and Director. We got a lot of questions when we first started telling our friends, clients and business partners we were planning our new school in Panama. So, here is the complete story on why we decided to choose Panama as the location for our second school campus.

It’s funny sometimes how things come about! In a way, ILISA Panama was born by ‘accident’. Something we hadn’t planned in the first place but the opportunity came along as another project was shelved. 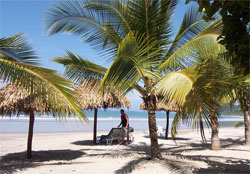 Over the years, some of our students had indicated they would love an ILISA campus at the beach. If we could clone the quality of ILISA’s teaching staff and our facilities and operate a school at one of Costa Rica’s beautiful beaches, wouldn’t that be ideal?

Being a school that mainly receives adult students who’s main focus is to increase their Spanish language skills, we wondered how that could be combined with the “ultimate distraction”: a beautiful beach right around the school’s premises…

So, we started investigating. And it was telling/interesting. Our research showed that 80% of all beach school students were young people under 25 who’s main goal was basically have a good time at a beautiful spot and find the right surf. Learning Spanish was a secondary goal at best. The pricing of the programs and the school facilities we visited seemed to reflect that the main market of these schools was the budget traveler where quality of teaching, facilities (like air-conditioning) and accommodations were open to compromise. Not quite something that matched the ILISA philosophy as our former students surely will agree.

We also learned that most schools were not within walking distance of the beach and none was at a beach. Nor did any of them offer an extensive program of activities, educational or leisure, to keep students from getting bored. We felt a typical ILISA student would hit the wall of boredom within a week. In the small beach villages of Costa Rica (typical population 2.000-4.000) saying that the cultural and social life is somewhat limited is an understatement.

Finding land at the beach or a hotel that could be converted to a nice beach campus was the easy part. It wouldn’t be cheap but we had seen several great locations. But when we started looking into the logistics of finding teachers and homestay we realized we would have to send them in from San José. Outside San Jose and Costa Rica’s Central Valley area there are basically no universities or other institutions of higher education; nothing that would provide us with a pool of talent to recruit future teachers. The same applied for homestay. Most homes that did meet our standard where owned by foreigners. 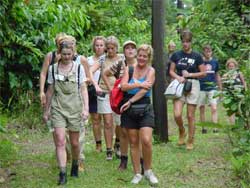 Which brought us to the third major problem: how authentic a learning environment is a Costa Rican beach town – or any beach town in Central America for that matter as they all share the same challenge – when 60% of the population consists of foreign tourists or residents? We have obviously nothing against tourism but where or when are you going to get your Spanish practice and interaction with the locals? Hardly ever. And, we are not even talking about inflated prices of the establishents catering exclusively to the tourism industry.

To make a long story short, in the end, we decided it just didn’t fit ILISA’s philosophy. To do it our way would be too expensive to be economically feasible and still not fix all the problems we would encounter. Morevover, it might very well send a confusing message to our clients about what ILISA stands for.

So the ILISA beach campus was called off. Kind of leaving us feeling disappointed. After all, those beaches are nice … 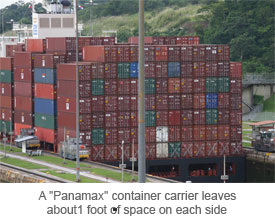 Then by coincidence, during Christmas vacation last year I discussed the whole issue with a friend who’s a hotel operator. He had just gotten back from Panama and told me how impressed he’d been and how he could see the potential of Panama as a destination for tourism. “Panama”, I thought, “Nah, who’d be going to Panama? Everybody goes to Costa Rica. Nobody knows Panama except for the Canal and/or the US invasion in ’89 to remove a military dictator General Noriega. Doesn’t sound like an easy sell ! ”

But, I decided to have a look online. I’d been in Panama in ’87 but just on short business trips and gone in and out without any real impressions negative or positive.
While surfing around I quickly realized a lot has happened in Panama in the last 15 years. The army had been abolished, several democratically elected governments had taken turn, the Canal had been handed back to Panamanian control and from all I read, they were doing an excellent job! Panama’s National Park system is as comprehensive as that of Costa Rica and the city’s skyline had changed dramatically. In short, enough reason to go down there and see for myself.

And that is basically how we got into Panama! That first trip was followed by several more where we discovered how perfectly Panama would fit ILISA’s philosophy. The concept of the Panama Campus was very appealing. We would be close to a modern, cosmopolitan city with a varied cultural scene. Universities abound to recruit teachers. And for those beach bums we would have a nice beaches only one hour driving away. 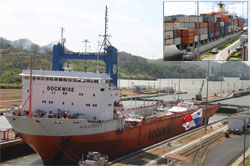 In the ‘why Panama‘ section we will go into great detail as to why we think you will enjoy Panama for your next language learning trip. Panama is much more than the Panama Canal and we are confident to say you will become as excited as we are now when you start to discover the real, present day Panama.

In fact, I liked it so much I convinced my wife to give up her job and move down there with our family to operate our new campus. I guess we are both pretty impressed ! 🙂