Ometepe – A weekend away

Ometepe – A Weekend away 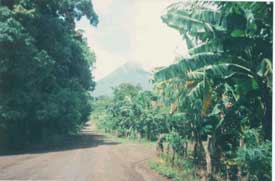 Nicaragua and Costa Rica are neighbors, but culturally and economically, the two countries often seem worlds apart. Ometepe offers a great alternative for adventurous travelers who want to get off the beaten path or for others who need to renew their Costa Rican tourist visas.

Ometepe is a figure-8 shaped island formed by the Madera and Concepción volcanoes and located in the center of Lake Nicaragua. On the island, there are several sites of interest, from the volcanoes themselves, to beaches, to petroglyphs, to a mysterious “green lake”. While you can’t see it all in a long weekend, here’s an overview of some of the island’s attractions.

To reach Ometepe, cross the border at Peñas Blancas, travel north to Rivas, then catch a taxi for a few dollars to the San Jorge where you can wait for the ferry across to the town of Moyogalpa on the island. Ferries of different classes run several times a day. Though sunsets in Moyogalpa are spectacular and a wide variety of shorebirds wade in the mud flats near the town, you probably won’t want to make it your home base. If you arrive early enough, catch a bus from Moyogalpa to either Santo Domingo or Altagracia. 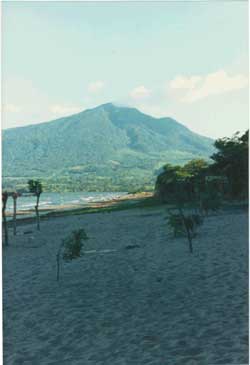 Beautiful Santo Domingo Beach, located on the east side of the island is between the volcanoes. Lake Nicaragua spreads out in front of you like a fresh-water sea. On especially clear days, you can see all the way across the lake. You can swim in the calm water, relax in a hammock on the beach and have a drink at one of the surfside restaurants. From Santo Domingo, you can find a guide to take you by horseback to see the petroglyphs for which the island is famous. Unfortunately guides are not always particularly well-informed about their significance. (One ILISA staff member was told by a guide that one of the petroglyphs represented a helicopter!) Horseback tours are available as well. You can also arrange for a guide to hike to the top of the Madera Volcano. (The Concepcion Volcano is still active, so you can’t hike the way to the top.)

The town of Altagracia on the northeast side of the island offers a feel for traditional Nicaraguan culture. You can easily walk from the town to several beaches (just ask for directions). You might also consider renting a bicycle for a few hours to ride around the area. The town also serves as a good starting point for the daytrips listed above. Because of the complications of bringing vehicles onto the island, there’s very little traffic making walking on Ometepe’s dirt roads a pleasure; the rural landscape is picturesque, especially when you catch a glimpse of the volcanoes through the trees.

As the island is primarily agricultural, you can expect to see rice, beans, corn, bananas, plantains, and other crops. Interestingly, the standard of living on the island is slightly higher than that of the mainland, primarily because the rich volcanic soil means that farmers don’t need to purchase fertilizer, greatly reducing their expenses. Another interesting cultural note is that Ometepe is the only place in Nicaragua (and perhaps in Central America) where farmers ride oxen, just like they’d ride a horse or mule.

Irán Barrantas worked at ILISA . He was a key player in the development of ILISA’s programs as co-author of our workbooks, as coordinator of a specialized program for one of our key government clients, and as a mentor to new teachers.

Irán Barrantes began teaching Spanish about a decade ago, almost by accident. “I had taken the Chamber of Commerce Exam and Civil Service exams in the field of Customs. Even though I passed the exams, I had to wait until a position became available. A Spanish teacher I knew suggested that I would be a good teacher, so why didn’t I try it while I was waiting to be called. He taught me the basics and I studied grammar and teaching techniques in my free time. A few months later, Customs offered me a position. I turned them down.

“Before teaching Spanish, I had always worked in accounting, with computers and telephones in a tiny office and I found that I loved teaching because of all the contact I had with people. I couldn’t bear the idea of going back to an office job.” Irán believes that the most important characteristic of a good teacher is the ability to transmit knowledge. “I know people with degrees in Spanish grammar, but if they can’t transmit that knowledge they are not good teachers.

“In order to help students, you need to be able to determine what the students’ needs are. For example, do they learn visually, through speaking, writing or by some other means? If you have different learning styles in a group of four, it’s a challenge to strike a balance that is helpful for all students.

“I feel so satisfied when I see that a student is learning. How incredible! And I love seeing the spark in their eyes when they understand something new!” 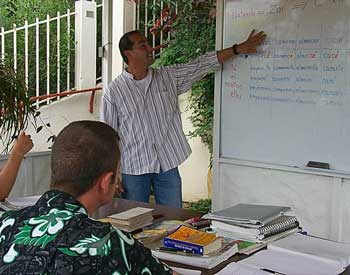 Irán has also learned a lot from his students, particularly about cultural differences and about learning disabilities. “Working with students with learning disabilities is always a challenge. They are intelligent people who have a dysfunction; the challenge for me is discovering how to help them.”

In addition to working at ILISA, Irán is studying education at the UNED, Costa Rica’s national distance university, where he was just awarded a scholarship for having one of the highest GPA’s in the university. He’s been able to apply much of what he’s studying to his ILISA classroom. Particularly helpful was a class on teaching children to read. “I’ve been able to apply some of those same methods when working with adults with learning disabilities.” Eventually, Irán would like to specialize in learning disabilities and language acquisition.

He foresees the day when “two or three languages will be required at minimum to function in the economy. I see myself helping people with learning disabilities to meet that requirement of the modern age.”

He offers a few words of advice for language students, too. “Learning a second language requires perseverance and lots of study. Also, since language is a social function, an immersion experience is required to really understand it. Students who take an immersion course should also plan to continue their studies immediately once they return home.” He points out, “The forgetting-curve is very high!”

Talking on the telephone is a basic skill, yet is often one of the hardest to master. The phrases below will help you handle telephone calls like a pro!